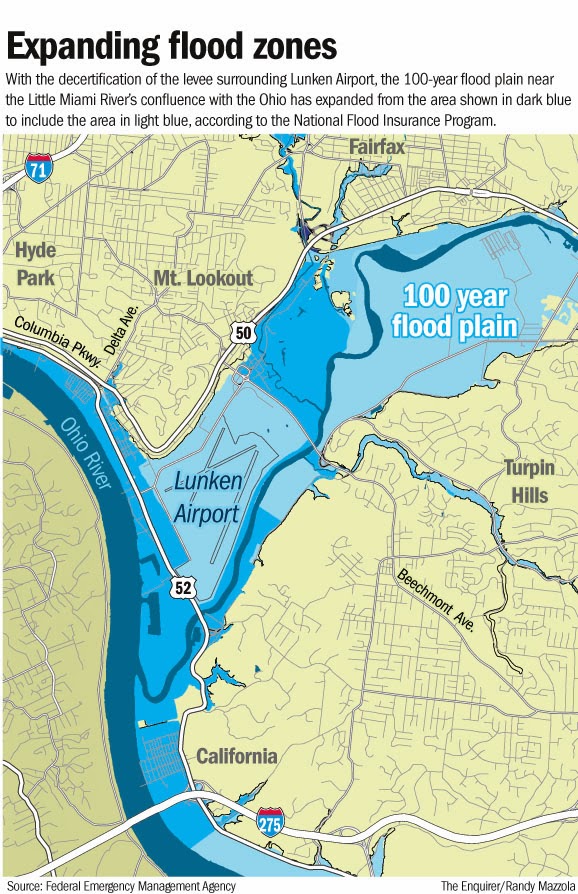 Hundreds of property owners in southeast Cincinnati must buy flood insurance for the first time, even though they’ve never had a flood – and many can’t even see a body of water from their land.
The chain of events that led to the requirement started when the city learned it had to spend tens of millions of dollars to add a foot in height to a levee near Lunken Airport to meet federal flood wall and levee standards. But the city didn’t have the money, so the engineers did nothing. It instead quietly decertified the levee. The result: a greatly expanded flood zone, requiring hundreds of area residents and business owners to purchase expensive flood insurance.
Meanwhile, area cities and towns have spent millions to certify and upgrade flood walls and levees to avoid the same fate. That includes small towns such as Dayton, Ky., which recently spent more than 5 percent of its annual $3 million budget to ensure its residents and business owners aren’t faced with the same new expense.
The Federal Emergency Management Agency isn’t necessarily a villain in this story. The agency, which oversees the nation’s flood insurance and flood zone programs, simply wants to enforce flood wall and levee standards set in the 1980s. It was a task begun before August 2005, when Hurricane Katrina overwhelmed New Orleans’ levee system and put new stress on a national flood insurance program that now teeters near bankruptcy.....
Cincinnati officials spent more than $500,000 on a study of levees in 2007-08 including those by Lunken, as well as those along Mill Creek.
The study revealed a flaw with the 5-mile-long levee that protects Lunken Airport and an adjacent sewage treatment plant from the nearby Little Miami and Ohio rivers. The levee was just a foot or two short of federal standards in most places – standards that call for a levee to be at least three feet higher than the point a 100-year flood is expected to crest.
Starting in 2009, the city’s engineering department tried to secure federal money for the required repairs, estimated to exceed $20 million. When three separate efforts came up empty, the city allowed the levee to become decertified without presenting the situation to City Council, and new flood maps went into effect in 2011.
“We had some estimates saying it could have cost as much as $100 million,” said Assistant City Engineer Amit Ghosh, who oversees Cincinnati’s flood-zone program. “And we knew that it upset some people, but it isn’t like the levee isn’t there at all anymore. We are still going to maintain it.”
The decision meant the entire area protected by the levee is now considered a high-risk flood zone, even though the levee offers protection for all but the most extreme floods.

Homeowners quoted in the story pay varying rates.  One says he now has to pay $900 a year for flood insurance, while another says she pays $2,100 a year, and that may double with the flood plain changes.  I don't know where the guy paying $900 a year lives, but as far as I'm concerned, that's a steal.  The article lays out some of the issues with modernizing the flood maps created in the '70s and '80s, but it doesn't even mention that climate change could be seriously redefining what we label as a 100 year flood.  Homes protected by levees are particularly at risk of flood damage, because the levees hold the flood waters at unnaturally high elevations, so if they fail, the damage to homes nearby is even greater than it would have been without them.  While the costs of the program are significant, the damages property owners face are even greater.

The program has run into huge problems over the years, most of them due to a lack of political will in addressing development in flood plains.  At my previous job, we dealt with a number of issues involving flood insurance and the 100 year flood plain.  As I remember, the regulations were interpreted to say that if someone had a basement below the 100 year flood plain elevation, they didn't need flood insurance if the ground surrounding the house was above the 100 year elevation.  If I were in charge of the program, basements wouldn't be covered for flood damage.  You can do all the work you want in your basement, but it is very likely that damage will occur.  Likewise, development in flood plains should be seriously considered, with significant factors of safety built in to the floodplain area.  Unfortunately, property developers usually have some pretty good pull with community officials, and no community officials like setting aside land for very low occurrence events like floods.

One organization which gets well-deserved mention in the linked story is the Miami Conservancy District.  This organization was created after the massive damage of the Great Flood of 1913, and it is a model of flood plain management.  It is an example of engineering overcoming politics.
Posted by A Farmer at 11:14 AM