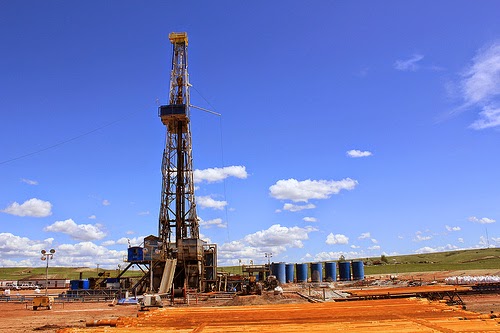 While production numbers increase, it depends on what the definition of crude oil is:


When the industry and the government talk about the price of oil sold on world markets and traded on futures exchanges, they mean one thing. But, when they talk about the total production of oil, they actually mean something quite different--namely, a much broader category that includes all kinds of things that are simply not oil and that could never be sold on the world market as oil.
I've written about this issue of the true definition of oil before. But Texas oilman Jeffrey Brown has been bending my ear recently about looking even deeper into the issue. He makes a major clarifying point: If what you're selling cannot be sold on the world market as crude oil, then it's not crude oil. It's such a simple and obvious point that I'm ashamed to have missed it. And, Brown believes that if we could find data that separates all these other non-crude oil things out, the remaining worldwide production number for crude oil alone would be flat to down from 2005 onward....
"Basically, crude oil peaked [in 2005], but natural gas and natural gas liquids [including lease condensate] didn't," he believes. Natural gas production has continued to grow, and as it has, its co-products have also grown--many of which have been lumped in with the oil production statistics....
Here's what's being added to underlying crude oil production and labelled as oil by the oil companies and reporting agencies:
•    Biofuels - Essentially ethanol and biodiesel.
•    Natural gas plant liquids - Butane, ethane, pentanes, propane and other non-methane components of raw natural gas.
•    Lease condensate - Very light hydrocarbons gathered on leased production sites from both oil and natural gas wells, often referred to as "natural gasoline" because it can in a pinch be used to power gasoline engines though it doesn't have the octane of gasoline produced at refineries.
•    Refinery gain - The most puzzling addition of all to crude oil supply calculations. This is merely the increase in the volume of refinery outputs such as gasoline, diesel and jet fuel versus the volume of crude oil inputs. It is due entirely to the expansion of the liquids produced, but indicates no actual gain in energy. In fact, great gobs of energy are EXPENDED in the refinery process to give us what we actually want.....
So, if oil production hasn't really been growing or at least not growing much in the last several years, what's all the hoopla about? As petroleum geologist and consultant Art Berman likes to say, it's a retirement party. There is one last, very difficult, costly and energy-intensive store of oil in low-quality deep shales containing crude. These shales--which are accessed using hydraulic fracturing or fracking--would never have been tapped if we were not already seeing a decline in the production of conventional, easy-to-get crude oil, the kind I refer to as Beverly Hillbillies bubbling crude as seen in the opening credits of the popular 1960s sitcom of that name.
The oil from deep shales (properly called "tight oil") is allowing production to grow in the United States even as production sinks elsewhere in the world. Other countries having shales containing oil will likely try to exploit them. But, the retirement party will only be a few years later for them as a result.
Despite what the public is being led to believe, oil wells in deep shales suffer from very high annual production decline rates--40 percent per year compared to the worldwide average of 4 percent. This implies that swiftly rising production will be followed by equally swiftly declining production in a compressed time frame--a classic boom-bust pattern.

Considering how optimistic all the reports from the Bakken and the Eagle Ford are, remember that before the Iraq war, we hadn't seen $40 a barrel oil.  After a brief spike to $140 during the commodity scam of 2008, we've settled at the what would have been crazy price of $100 a barrel, despite the U.S. producing 2 million barrels a day more "crude oil" than we were in 2009.  When (not if) the shale plays top out, we're going to see much higher prices.

Back to the crude oil production numbers: