Fed Up, Obama Gets Drunk, Makes Biden President For A Day 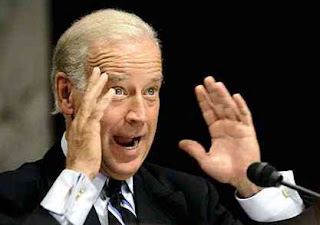 This morning, White House Press Secretary Jay Carney and Joe Biden appeared at an impromptu press conference to announce that Biden will serve as President for the day:

"Last night, the President told Mrs. Obama he'd had enough of this shit, and he was just going to get shitface drunk.  So he proceeded to do so.  At midnight, he called Vice-President Biden to the White House, and explained that Biden was in charge while he took today to sleep off his hangover.  President Biden has decided to take the opportunity to pardon a Thanksgiving turkey and to throw out the first pitch at Nationals Park," announced Carney.

President for the day Biden came forward to explain:

"When I got to the White House, Barack was really lit up.  There were beer bottles lined up on the window sill in the Oval Office.

He said, 'Joe, I've had enough shit for one week, I'm getting blasted.  Did you see that shit show at the Supreme Court?  Fucking Scalia was asking if the government could order people to eat broccoli!  Fucking broccoli!  I tell you what, that fat son of a bitch could back off on eating the spaghetti and have a couple of helpings of broccoli, and he ought to skip dumping cheese all over it. Maybe we should have explained that George H.W. Bush signed an executive order making it illegal for anyone to force a person to eat broccoli, and I'm not going to overturn that.  Damn Roberts was asking if we'd force people to have cell phones for emergencies.  What fucking planet is he on?  Every child over the age of three has a cell phone!  Homeless people have cell phones!  Geez, the only person I know of today who doesn't have a cell phone is their former colleague David Souter.  Those lousy bastards are going to throw out the only thing I could get those worthless shits up on Capital Hill to get done.  Then last night, I had to listen to that puerile weasel David Brooks on NPR attacking the health care bill from the fucking left.  He was saying that single-payer would obviously be constitutional, or we could constitutionally tax everybody, then give everybody with health insurance a tax credit.  He pointed out 10 million people would still be without health insurance under my plan.  How in the fuck does that ball-less bastard work up the nerve to say that shit?  How does he manage to talk with Paul Ryan's dick in his mouth?  Maybe somebody ought to point out to the dickweed that the reason so many people will still be uninsured is because it is a shitty Republican plan I used to try to get one lousy Republican fucker to vote for, which worked wonders, and those racist fuckers wouldn't let a penny be spent on illegal immigrants.  I'm fed up with this shit.  Let's do a car bomb.'  At that point, the President and I did Guinness boilermakers, but I was a little slow, and it got all gross, and I gagged, and chucks came out of my nose.  After that, the President told me to hold down the fort for the day, and went off to make time with Michelle, if you know what I mean.  And, I mean, you've seen her.  I fantasize about her wearing a leotard and being my personal trainer every day. "

When asked why he was pardoning a turkey 8 months before Thanksgiving, and throwing out the first pitch at an empty Nationals Park two days before the Nationals exhibition game against the Red Sox, and eleven days before the Nationals' home opener versus the Reds, Biden explained that they were the main things he wanted to do as President anyway, so he might as well do them on his big day:

"That turkey pardon deal always makes me laugh, except for that time Sarah Palin did it, and those Alaskan rednecks were in the background killing turkeys.  I couldn't sleep for two days."


"As for throwing out the first pitch, I did it in Baltimore a couple of years ago, and it was a blast.  The only problem was, that damn Oriole mascot kept poking me and stuff, so I went and popped him one.  Then I found out, it was a dame in that costume.  That didn't go over so well.  Any way, I was hoping to throw out the first pitch in Cincinnati, because there's a parade and all, and I love that shit, but those tea party bastards said they wouldn't allow a Democrat to throw out the first pitch after the mayor of Cincinnati almost threw his pitch into the Reds dugout.  I mean Christ, they let fucking Dick Cheney throw out the first pitch on Opening Day.  I think the organist played the Darth Vader march music, and he got sent to Gitmo.  Cheney's a fucking war criminal, and a fucking heart attack waiting to happen.  Speaking of which, did you see they gave that guy a heart transplant?  I think he drank a couple of beers, took some dude hunting, shot him, pulled out his heart, and had some doctor sew it in.  Somebody told me he showed up at the hunting cabin with the heart, and it was still fucking beating. Can you believe that shit?  Anyway, I didn't get any opening day invites, so I decided, I'm president, I'll throw out a pitch if I want to throw out a pitch.  Also, today is Neapolitan Ice Cream Day.  I love that shit!  I can never decide whether I want Vanilla or Chocolate, and here they put it all in one box and throw in Strawberry too.  Ok, I've got to go.  Can't stand here yakkin' with you guys when I've got a country to run.  Plus I've got to get to the command center to oversee our invasion of Canada, those puck slappers are getting all uppity about their money being worth more than ours, so I'm going to teach them a lesson.  I'll talk to you tomorrow, when I'm back at the old job."

Fox News ran some stock footage of an empty lot littered with malt liquor bottles, and debated whether the President was a Colt 45 or an Old English drinker.  They also interviewed white people in the South because they know what happens when the black people get some booze in their system.  Finally, they tried to determine which white women Obama likely ravished overnight.

Happy April Fools Day.
Posted by A Farmer at 7:33 AM

Email ThisBlogThis!Share to TwitterShare to FacebookShare to Pinterest
Labels: Apocalypse and Other Unlikely Events, Beer and other gifts from God, Fun