Bob Horner In The News Again 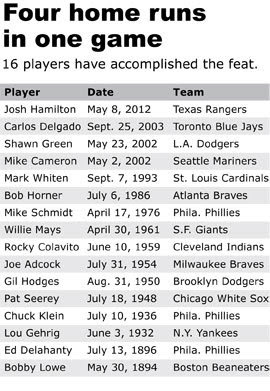 I didn't expect to see Bob Horner mentioned twice in a week.  Josh Hamilton's achievement gives Jeff Passan a chance to discuss why he would be hesitant to sign Hamilton to a long term deal:


He is indubitably both men: the American League's representative in the most-talented-player-in-baseball contest opposite the National League's Matt Kemp and the recovering addict who twice has suffered embarrassing public relapses that, coupled with a deep injury history, muddy any prognosis of long-term viability. The dichotomy defines Hamilton. For every moment to savor – from his kicking a crack habit to his historic Home Run Derby showing to his AL MVP award to his becoming the 16th member of the four-homer club against the Baltimore Orioles – just as many draw concern from the teams tasked with properly valuing him as he is primed to hit free agency for the first time this offseason.
Whereas questions about how they would age accompanied Albert Pujols and Prince Fielder's forays into the open market last offseason, Hamilton's case is more complicated, his past hovering over his present. And it's what makes the time between now and when he signs his next contract so fascinating.
Now, all of this may be moot. After tabling extension talks following the February incident in which Hamilton drank, the Rangers and the player's representatives have started discussing a long-term contract. Just how much Hamilton's incredible start – he leads the major leagues in batting average (.406), home runs (14), RBIs (36) and slugging percentage (.840) – has emboldened him will in large part determine whether the sides can hammer out a deal to keep the 30-year-old outfielder in Texas. The Rangers understand he's among a handful of players capable of nights like Tuesday: a quartet of two-run homers, off three different pitchers, plus a double for an AL record 18 total bases.

Hamilton is a fascinating, if scary dude.  I just get the feeling that disaster is always right around the corner.  Hopefully he can secure that long-term deal, without making the challenges in the rest of his life any more difficult.