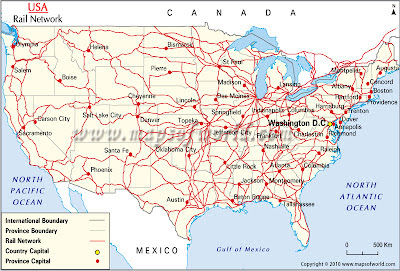 
ix of the nation’s seven biggest railroads pass through the city, a testament to Chicago’s economic might when the rail lines were laid from the 1800s on. Today, a quarter of all rail traffic in the nation touches Chicago. Nearly half of what is known as intermodal rail traffic, the big steel boxes that can be carried aboard ships, trains or trucks, roll by or through this city.

The slowdown involves more than freight. The other day, William C. Thompson, a project manager for the Association of American Railroads, stood next to a crossroads of steel in the Englewood neighborhood pointing to a web of tracks used by freight trains and Amtrak passenger trains that intersected tracks for Metra, Chicago’s commuter rail. The commuter trains get to go first, he said, and so “Amtrak tells me they have more delays here than anywhere else in the system.”
More delays than anywhere else in the Chicago area? No, he said. “In the entire United States.”
Now, federal, state, local and industry officials are completing the early stages of a $3.2 billion project to untangle Chicago’s rail system — not just for its residents, who suffer commuter train delays and long waits in their cars at grade crossings, but for the rest of the nation as well.
The program, called Create (an acronym for Chicago Region Environmental and Transportation Efficiency Program), is intended to replace 25 rail intersections with overpasses and underpasses that will smooth the flow of traffic for the 1,300 freight and passenger trains that muscle through the city each day, and to separate tracks now shared by freight and passenger trains at critical spots. Fifty miles of new track will link yards and create a second east-west route across the city, building redundancy into the overburdened system.

One thing I don't understand about the nation's rail system is that there are 2 major eastern railroads (CSX and Norfolk Southern) and 2 major western railroads (Union Pacific and Burlington Northern).  They have to work out shipping traffic from one system to the other.  I would have thought the western railroads would have merged with the eastern railroads, and they could have found ways around Chicago and eliminated exchanges on traffic across the country.  Maybe there aren't consistent route pairings which would be linked by mergers, but I've been waiting for those deals to be made for quite a few years.  At least there is work being done to clear up the bottleneck in Chicago.
Posted by A Farmer at 5:40 AM

Email ThisBlogThis!Share to TwitterShare to FacebookShare to Pinterest
Labels: Engineering and Infrastructure, Strange But True, Things I Don't Understand