Stuart Staniford reviews Saudi oil production, which looks to have reached a new high in November: 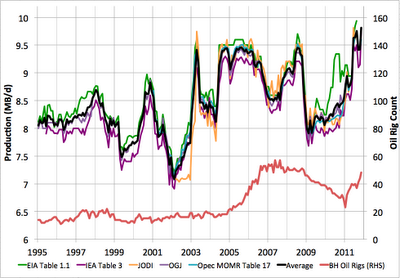 Notwithstanding that, it is of considerable interest that Saudi production increased substantially in November despite the fact that Brent has been falling overall.  I take this as a (minor) point of evidence in favor of the idea that the fall in September/October was something Saudi Aramco could not easily avoid, because they are producing at or near capacity and thus the level of production is subject to minor technical glitches in the individual oil fields, as opposed to the idea that Saudi Arabia was intentionally reducing production because prices were falling.

If that is the case, we don't have any spare capacity out there.  I'll give them credit though, I didn't think they'd even be able to increase production.  I figured they would have in 2008 if they could have.  Of course, they may have invested a lot of money to increase secondary recovery since then.
Posted by A Farmer at 3:54 PM