This weekend I came across a Sports Illustrated article on Stan Musial: 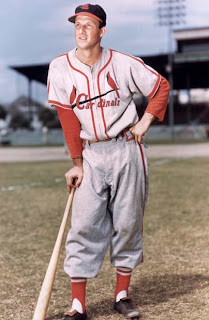 Too quiet, perhaps. ESPN recently called him the most underrated athlete ever. Fox did not even televise Musial throwing out the first pitch before last year's All-Star Game in St. Louis. A few years back, when Major League Baseball held a fan vote to name its All-Century Team, a special committee had to add Musial because the fans did not vote him as one of the 10 best outfielders ever. Ten! Only Aaron had more total bases. Only Tris Speaker and Pete Rose hit more doubles. Using Bill James's famous formula, only Babe Ruth and Barry Bonds created more runs. Still, Musial did not get America's vote. He is not forgotten, not exactly. It is more this: For most of the nation, Stan the Man is a name that has faded into the great American past like singers wearing tuxedoes, John Wayne movies and kids shooting marbles.
But not in St. Louis. No, here they shout out for Stan Musial. They hold a citywide campaign—Stand for Stan!—to encourage President Obama to award Musial the Presidential Medal of Freedom, something like an American knighthood, a medal that has already been given to Musial contemporaries Aaron, Williams, Joe DiMaggio and Frank Robinson. Fans are encouraged to have their photos taken with a paper Flat Stan the Man, a play off the children's book, Flat Stanley. People meet at the Musial statue in front of the new ballpark; the Musial statue has long been St. Louis's favorite meeting spot, even before it was moved from in front of the old Busch Stadium to the new one. And during spring training this year Cardinals players came back to the clubhouse to find a reading assignment, a story about Musial that manager Tony La Russa had printed out for them to read and discuss.
"To me," La Russa says, "Stan's spirit is very much a part of what we're trying to do here."