The Plight of a Knuckleball Pitcher


Here's the crazy part of the way R.A. Dickey makes his living: On some days -- on some of his best days, in fact -- he has no idea what he's doing.
OK, that's not quite right: In his brain, he has a perfect, almost pristine, understanding of how he wants to go about his business, how he wants to attack hitters, how he wants to manage batting orders. It's just that his most bankable skill -- the ability to throw not one but two knuckleballs, one that tops out at 80 mph, one that bottoms out near 60 -- is the kind of proficiency that isn't reliant solely on his right arm. 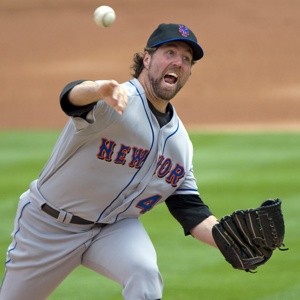 Anthony J. Causi
PITCHER PERFECT: R.A. Dickey, who struck out seven, walked three and gave up five hits over six innings of work yesterday, delivers a pitch during the Mets' victory over the Marlins.

"The wind can be a big help," he said yesterday. "Or it can be a big problem."
"How do you know which is which?" he was asked.
"A lot of times you don't," he said.
He smiled as he said it, not surprising since in his first outing of 2011 Dickey looked an awful lot as he did across most of 2010. With the wind turning the baseball into a Wiffleball, he struck out seven Marlins; he also walked three of them. It's why his day only lasted six innings, but he wasn't complaining. The Mets didn't win a road series last year until June; after this 9-2 drubbing of the Fish they're already 1-for-1.

That is the challenge of being a knuckleball pitcher, some days it works, but some days it doesn't.  When it works, it is awesome, and when it doesn't, you are taking an "L".  It is by far the most interesting and yet the most frustrating pitch in the history of baseball, and good practitioners make the game the best there is to watch.
Posted by A Farmer at 10:51 AM