Chart of the Day 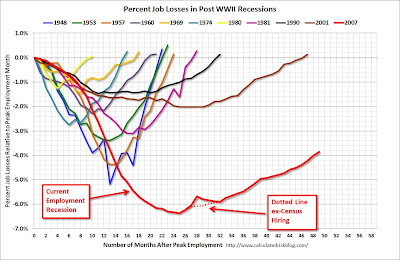 We're going in the right direction, but we've got a long, long way to go.  For Obama and the Republicans, the main issue will be where are we at as compared to January 2009, and who do the voters blame more for the job losses between then and the bottom.  Unfortunately for the Republicans, I think if things keep improving, the blame will be heaped on Bush, and the Republicans will have to try to win on social issues.  They've done a terrible job so far on that front, and I would expect more fail if social issues become their biggest campaign issue.
Posted by A Farmer at 9:50 AM