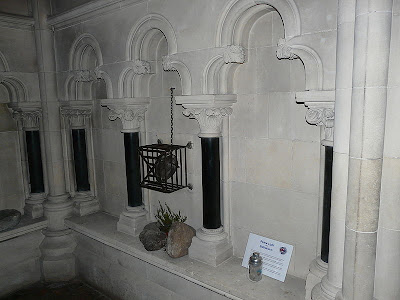 The preserved heart of Laurence O'Toole (Lorcán Ua Tuathail) in Christ Church, Dublin (prior to theft)
From the AP (h/t nc links):


Officials at Christ Church Cathedral in Dublin said Sunday they're distraught and perplexed over the theft of the church's most precious relic: the preserved heart of St. Laurence O'Toole, patron saint of Dublin.
O'Toole's heart had been displayed in the cathedral since the 13th century. It was stored in a heart-shaped wooden box and secured in a small, square iron cage on the wall of a chapel dedicated to his memory. On Saturday someone cut through two bars, pried the cage loose, and made off with the relic.
"I am devastated that one of the treasured artifacts of the cathedral is stolen," said the Most Rev. Dermot Dunne, the cathedral's dean. "It has no economic value but it is a priceless treasure that links our present foundation with its founding father."
Ireland's national police force, the Garda Siochana, said detectives were studying hours of closed-circuit TV footage to try to identify the approximately 40 people who walked out the cathedral's front doors Saturday morning.

I have no idea why people would be out stealing saint relics in Ireland.
Posted by A Farmer at 8:27 AM

Email ThisBlogThis!Share to TwitterShare to FacebookShare to Pinterest
Labels: Across the Atlantic, Strange But True, the Church