A Bubble In The Tundra?

Matthew O'Brien looks at the housing bubble in America, Jr.: 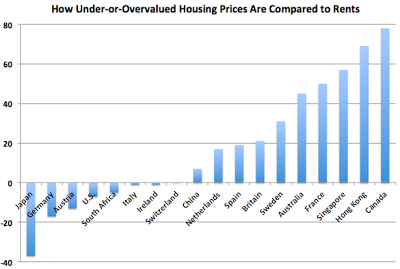 Canada is quietly trying to deflate its bubble without any eye-catching headlines. And that means keeping interest rates low while making mortgages harder to get. Now, raising rates to pop a bubble sounds like the kind of hard-hearted long view central bankers pride themselves on, but it's more hard-headed. Higher rates don't just make housing (or any other asset bought with borrowed money) less affordable for new buyers; they make them less affordable for old buyers with adjustable-rate loans too. That sends prices spiraling down and savings racing up, as heavily indebted households, which Canada has no shortage of, try to rebuild their net worths. Higher desired savings outpaces desired investment -- in other words, the economy collapses -- and subsequently cutting rates, even to zero, won't do much to reverse this, as houses and businesses are mostly indifferent to lower borrowing costs while they focus on paying down existing debts. It's what economist Richard Koo calls a "balance sheet recession," and it's a good description of how an economy can get stuck in a liquidity trap.

But by keeping rates where they are and slowly tightening mortgage requirements, Canada hopes to engineer a more gradual price decline that won't set off a vicious circle. In the best case, prices wouldn't fall, except below the rate of inflation, so that real prices decline without hitting household net worths. This strategy is hardly unique -- China has done the same the past few years -- but it has the very Canadian name of "macroprudential regulation".

Reportedly, Vancouver's market is really out of whack because of Chinese investors buying there.
Posted by A Farmer at 12:40 PM

Email ThisBlogThis!Share to TwitterShare to FacebookShare to Pinterest
Labels: Fools and Their Money (Temporarily), Other Parts of North America, The Pyramid Scheme of the World Economy, The World Doesn't Revolve Around The U.S.