Weaponizing Animals Is An Old Idea 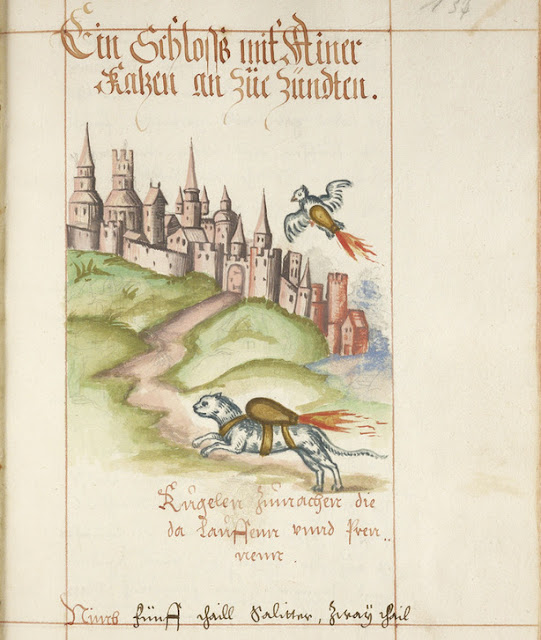 
Think you're the first person to consider the offensive capabilities of cats and birds in a hypothetical war against zombies space invaders enemies of the Holy Roman Empire? Think again!

The Germans beat you to it by about 425 years, as proven by this painting, which BibliOdyssey found and The Appendix Journal posted to its Tumblr. The manuscript from which it was drawn was called "Feuer Buech," which I'm guessing translates from the old German to English as "Fire Book." It's a "treatise on munitions and explosive devices, with many illustrations of the various devices and their uses."

The University of Pennsylvania, which digitized this manuscript, describes this image as, "Illustration, cat and bird with rocket packs."

Apparently, the idea was to pretty much strap a molotov cocktail type weapon to the cats and birds and send them into walled cities under siege.  I highly recommend clicking through to see the comments.  They are enlightening AND entertaining.  Also, the front page of The Atlantic had the best headline I've seen in awhile:  Do Not Strap a Jet Pack to Your Cat.
Posted by A Farmer at 8:22 PM

Email ThisBlogThis!Share to TwitterShare to FacebookShare to Pinterest
Labels: Across the Atlantic, Bad Ideas, Strange But True, War