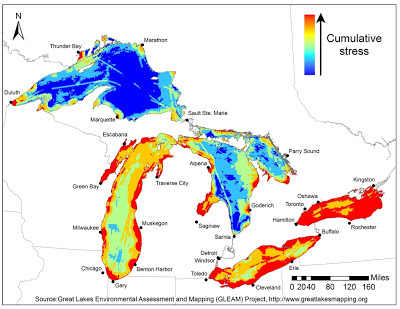 A first-of-its-kind map that pulls together numerical data on nearly three dozen factors that affect the Great Lakes ecosystem shows that the lakes with the most urban and agricultural development in their watersheds are also those with the greatest environmental stress.
Lakes Erie and Ontario, the easternmost lakes, are challenged by high coastal population densities, an industrial legacy and phosphorous pollution from agricultural runoff. They are also downstream from wind currents that drop nitrogen generated by industries and power plants into their waters.
But the map’s patches of high-stress red and yellow should not be misinterpreted. The color scale is a relative measure that compares the combined stress of the 34 environmental indicators in a particular area to the stress level of the lake system as a whole.
“Red does not mean the sky is falling,” explained Peter McIntyre, a project co-leader and an assistant professor at the University of Wisconsin who studies aquatic biodiversity. It means that conditions are worse there than other areas.

It isn't a real surprise that Erie and Ontario face the greatest stress since they have the most people impacting them, they are the smallest and shallowest lakes and they are downstream of the rest.  It is a really interesting map.  There are also have maps of the individual stressors which added into the combined map.  Here's the phosphorus map (note the inset on the Western Basin of Lake Erie): 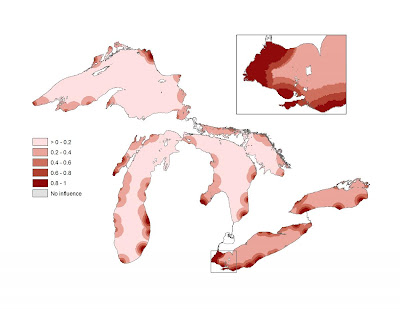 The whole thing is worth checking out.  The Maumee River basin (NW Ohio and NE Indiana) looks to be contributing significantly.
Posted by A Farmer at 12:10 PM

Email ThisBlogThis!Share to TwitterShare to FacebookShare to Pinterest
Labels: Ag news, News in the Midwest, Science and stuff